- December 22, 2014
Last week, we were invited over to our sweet friends' house (the Andersons) for dinner and to share in one of their holiday traditions.  For me who loves this kind of thing, it was such an honor to get to be a part of one of their annual Christmas celebrations.

Brooke told me that one of her mom's friends came up with this idea, and her family kept this going through the years as she was growing up. Through the years, she commented that she and her siblings would roll their eyes some years as they would announce the night for this tradition, but now as a mom, she and her sister both do this every year and would not miss it.  It's true that some of our traditions become more meaningful to us as time goes on, and we become the ones to keep the flame alive as we've recognized what rich memories they hold for us through the years.

This tradition is now fondly called "NATIVI-TIME" by Brooke and her sister. 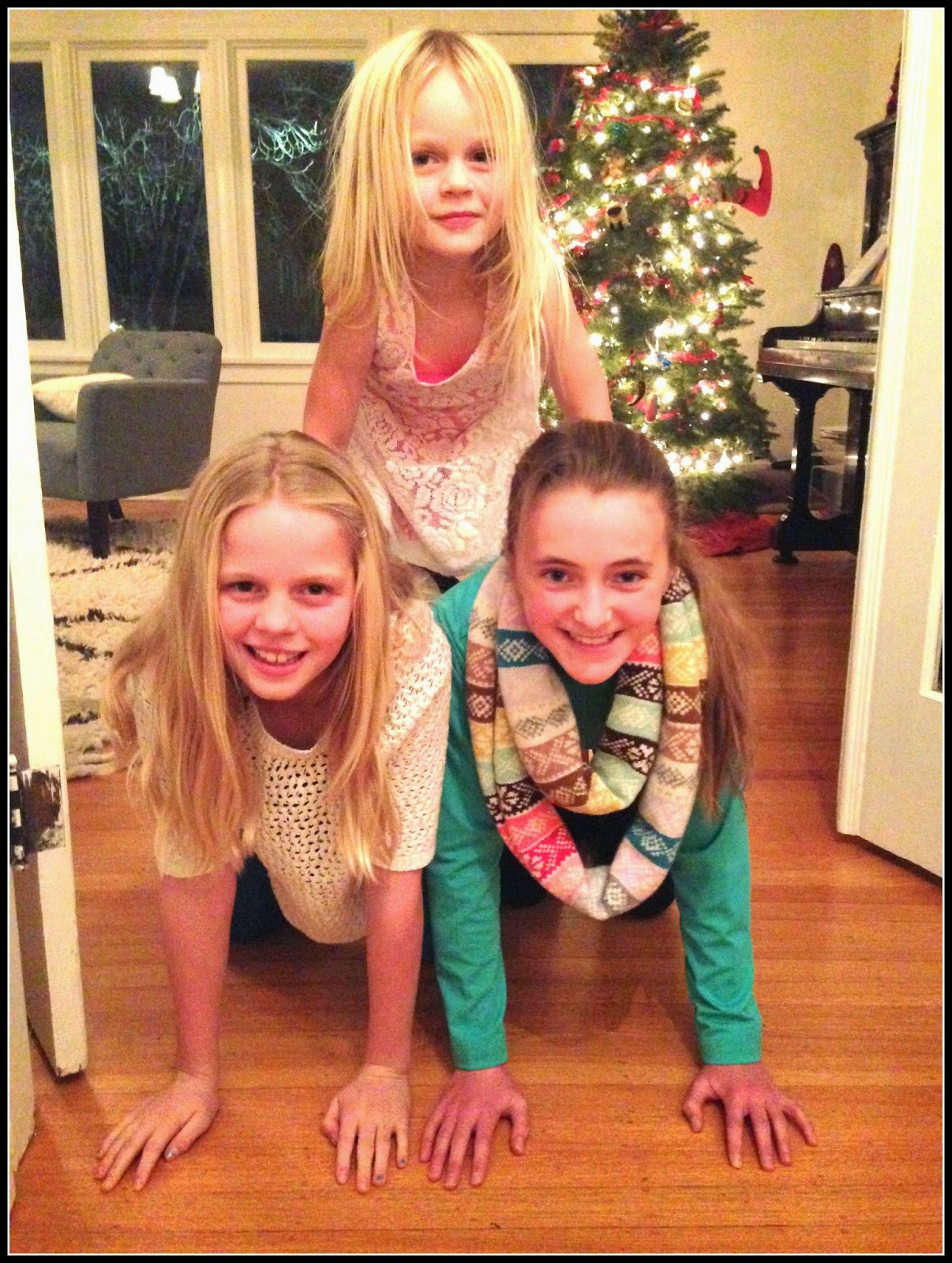 First, we gathered in the living room around the coffee table with an empty manger scene.
Brooke had a basket of small wrapped gifts and we each picked a gift that had a number written on the wrapping paper.  That number determined which order we would open the gifts.

For the person who held the gift labeled with the #1, he unwrapped it and found the figure of Joseph from the manger scene.  Then he read the card that went with the gift to narrate the story that was unfolding.  Most of the cards had a Christmas carol named at the bottom which we would sing before the next gift was opened.  Sometimes, we would just sing the first verse of the carol, and sometimes we would sing all the verses. 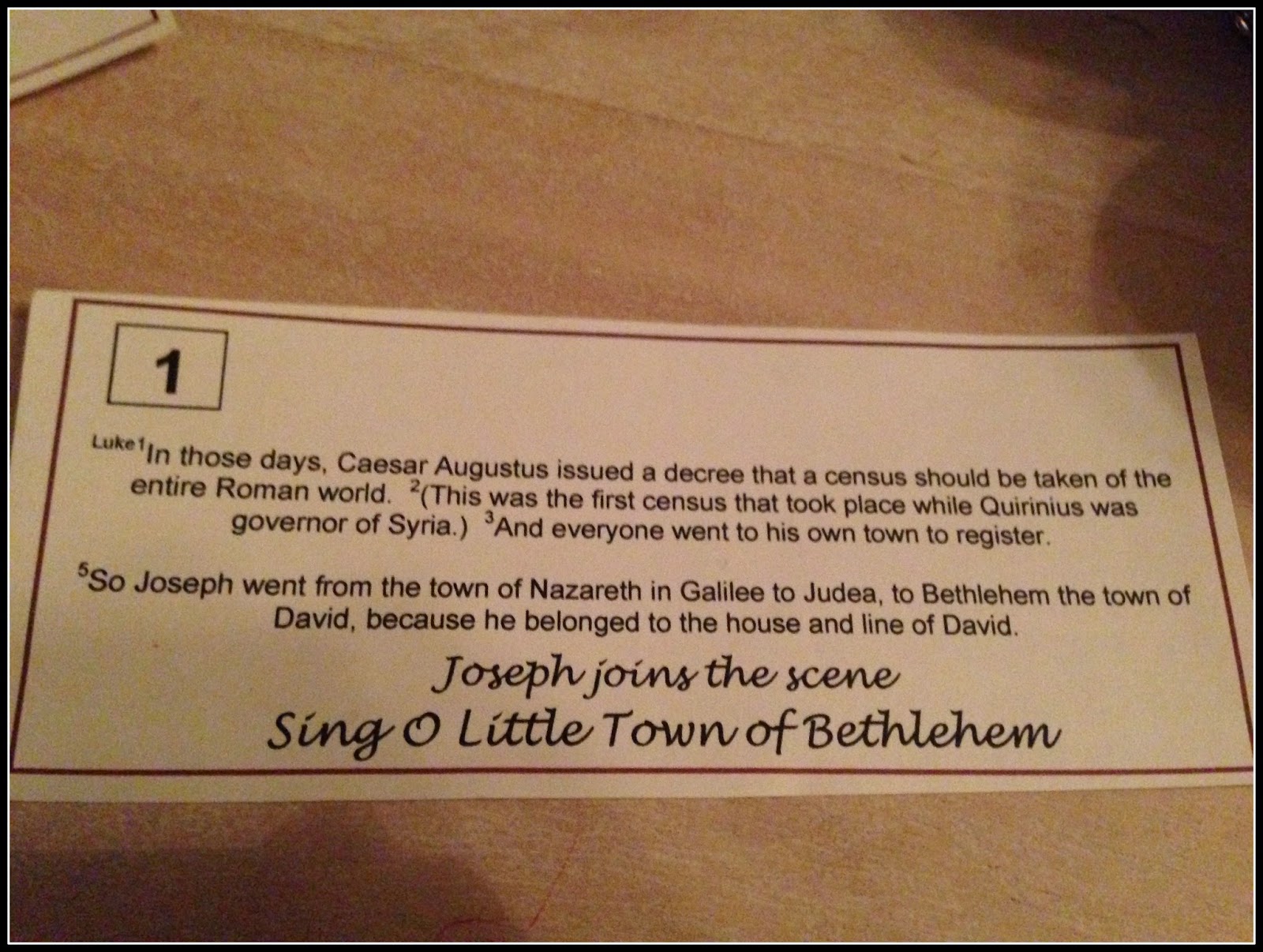 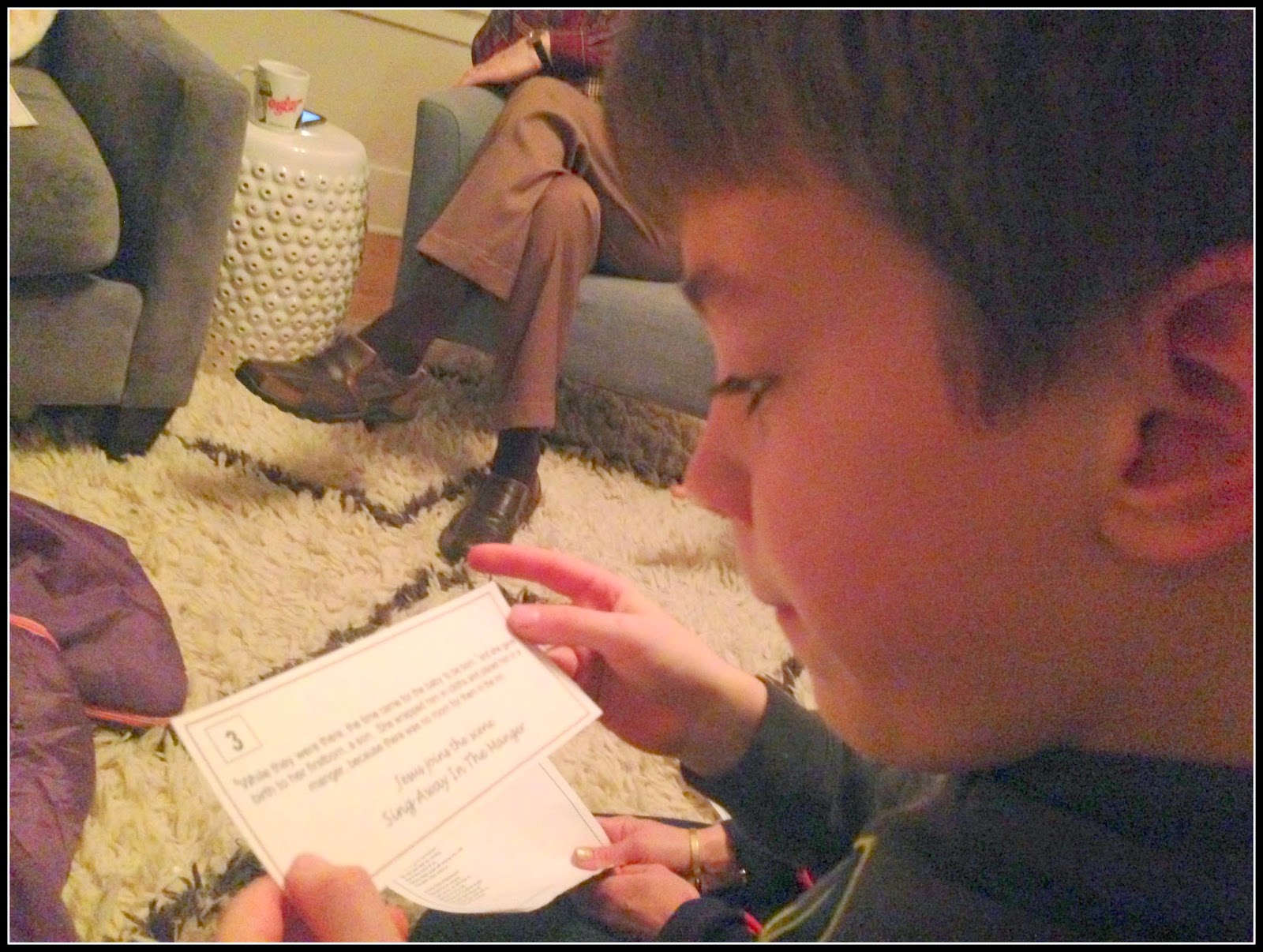 Even though we all knew the story, it was still such fun to have the surprise of each gift opened and to hear each person read her part for the whole story to unfold. 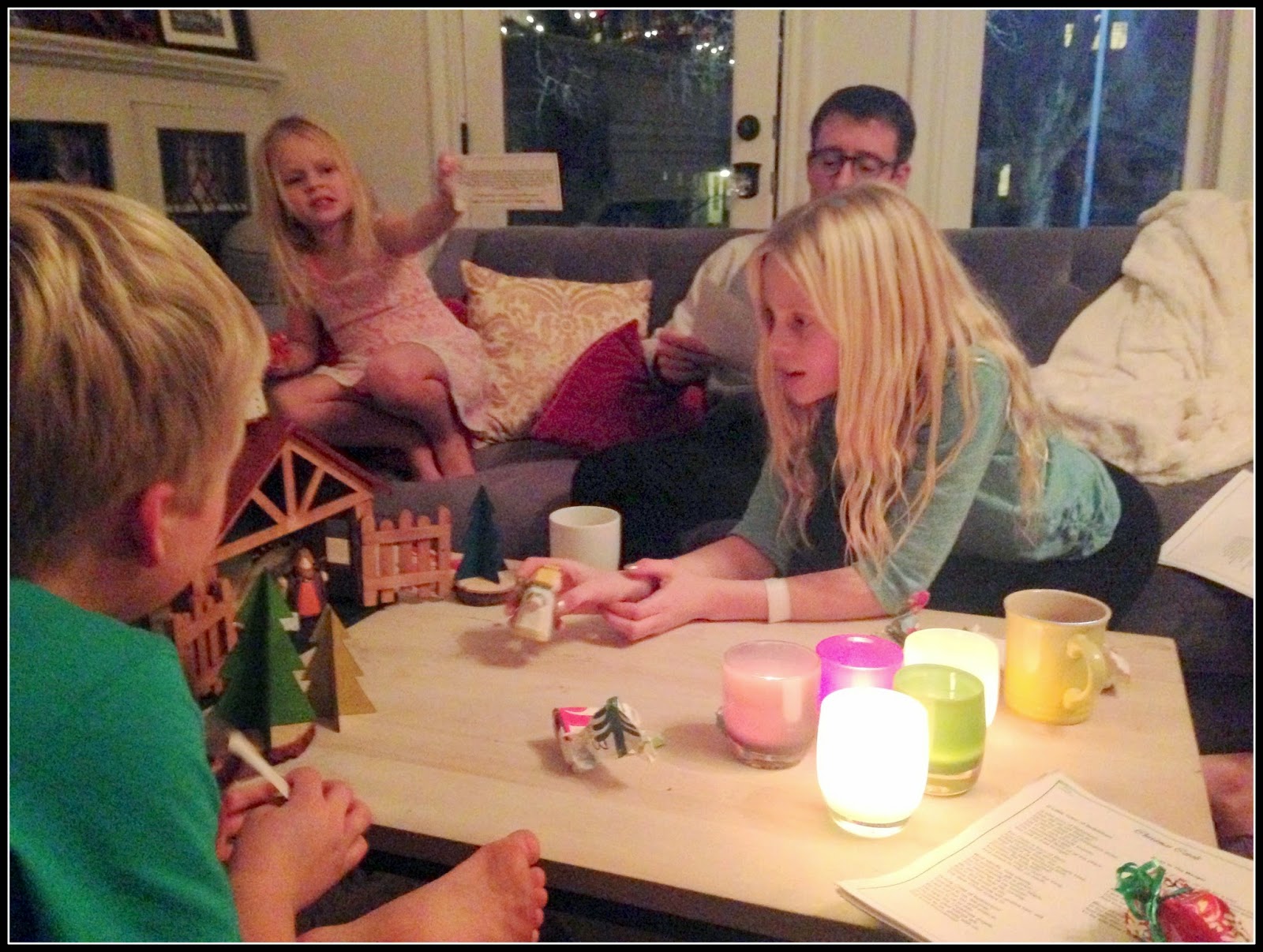 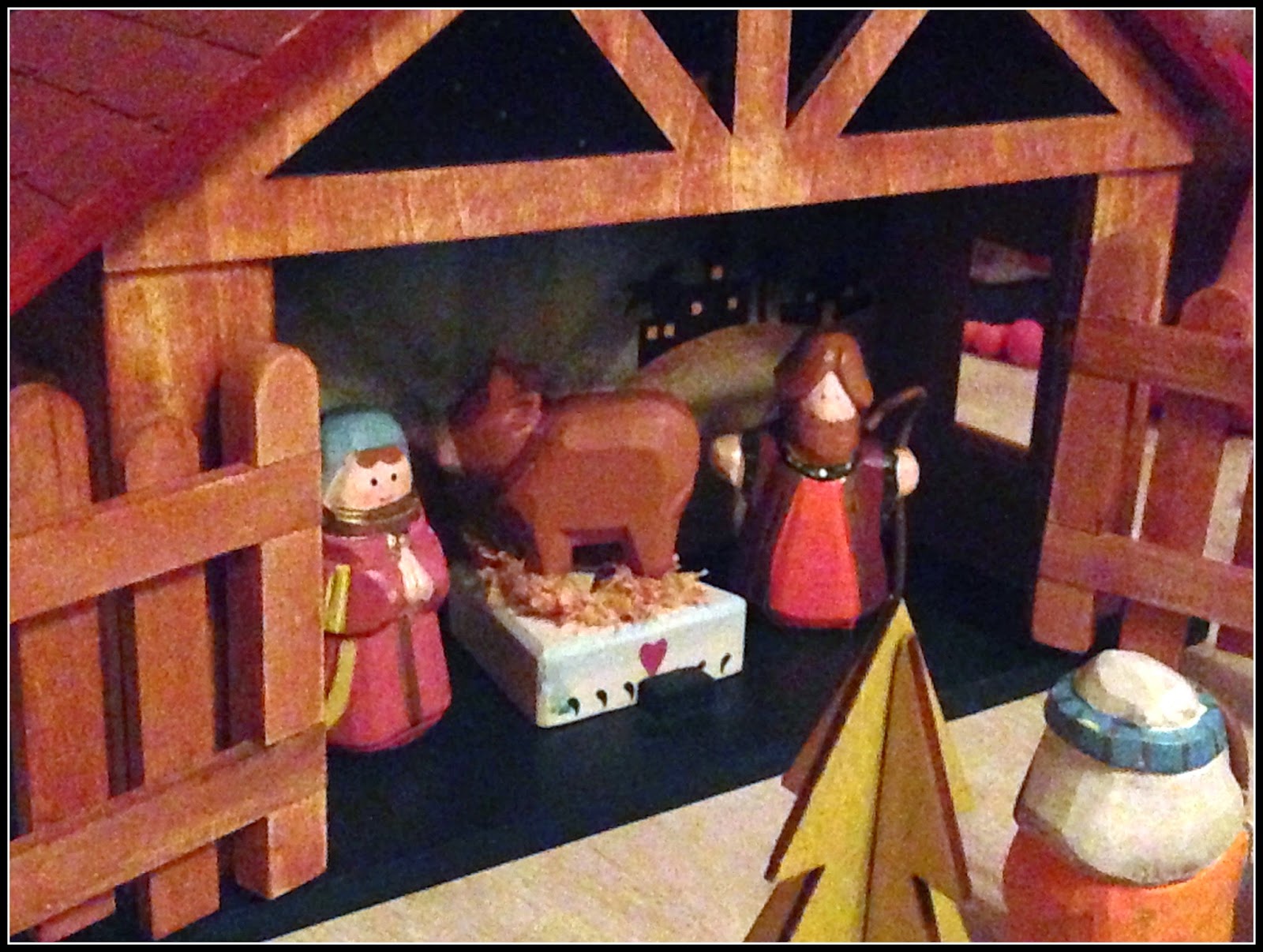 And yes, the cow did end up in the manger. 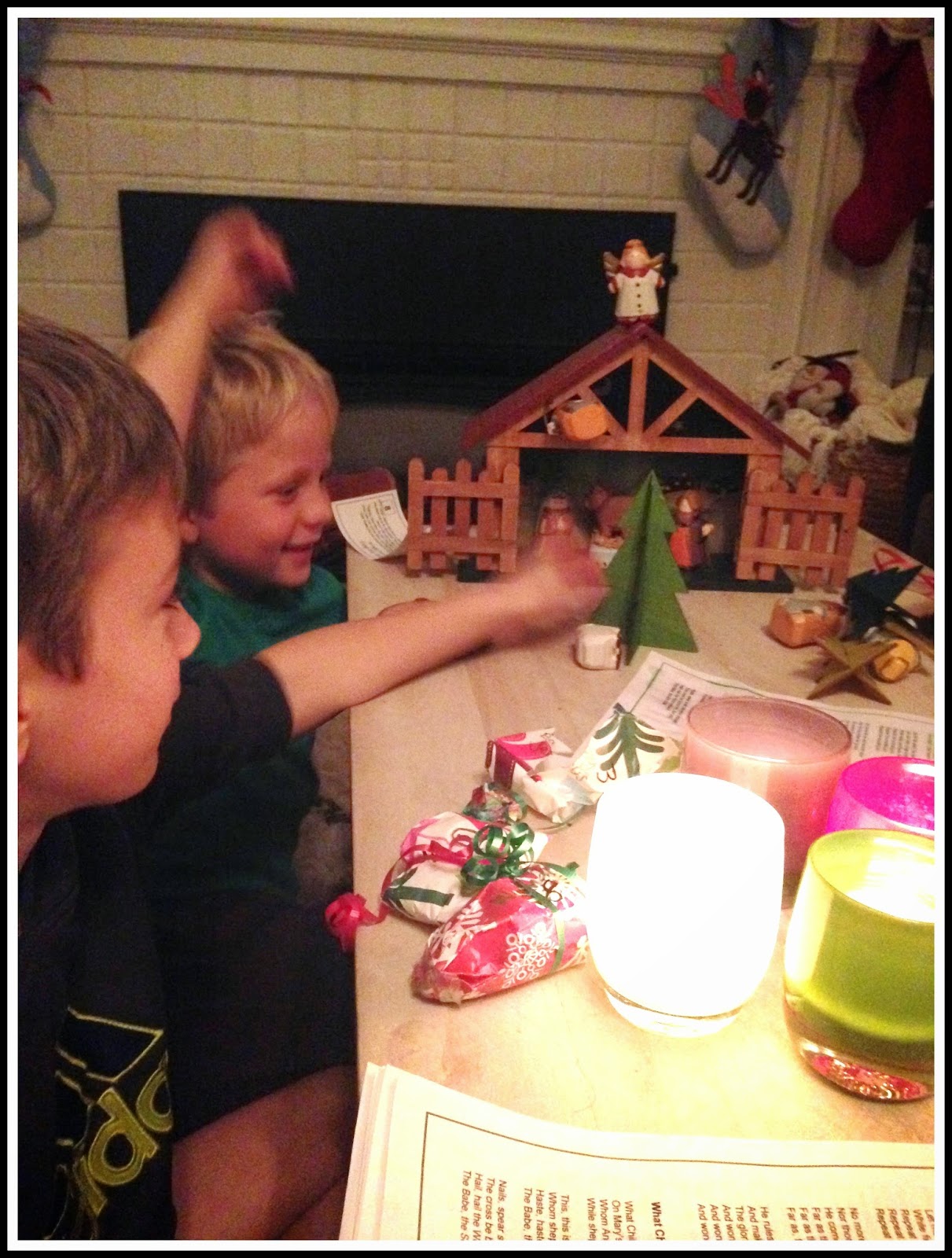 And the boys kept us laughing as they rearranged some of the scene. 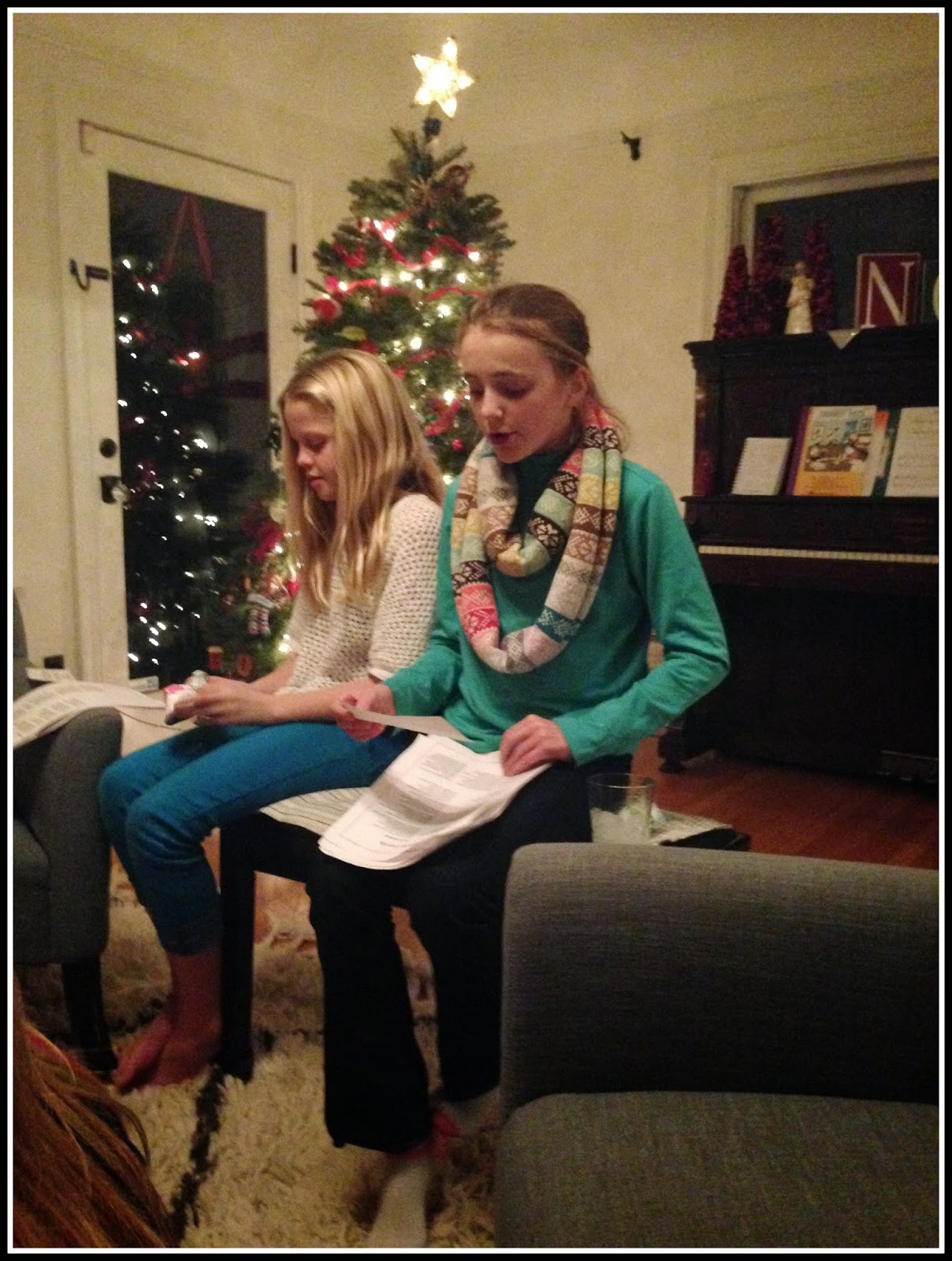 This was such a treat to be invited into this wonderful, quirky, and fun tradition with our sweet friends....

So, bring out your manger scene, wrap up some gifts and call everyone over for some
Nativi-Time! 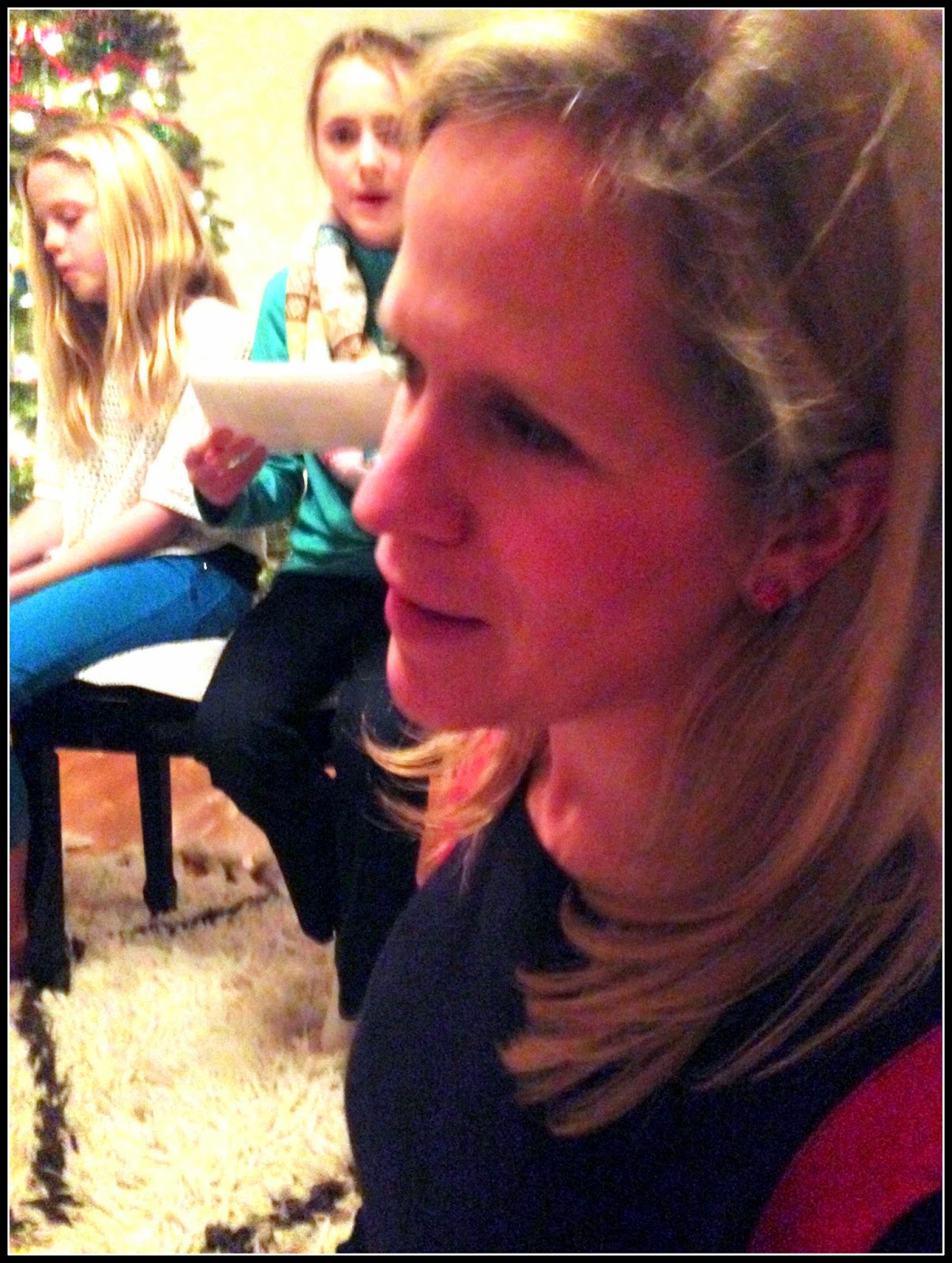 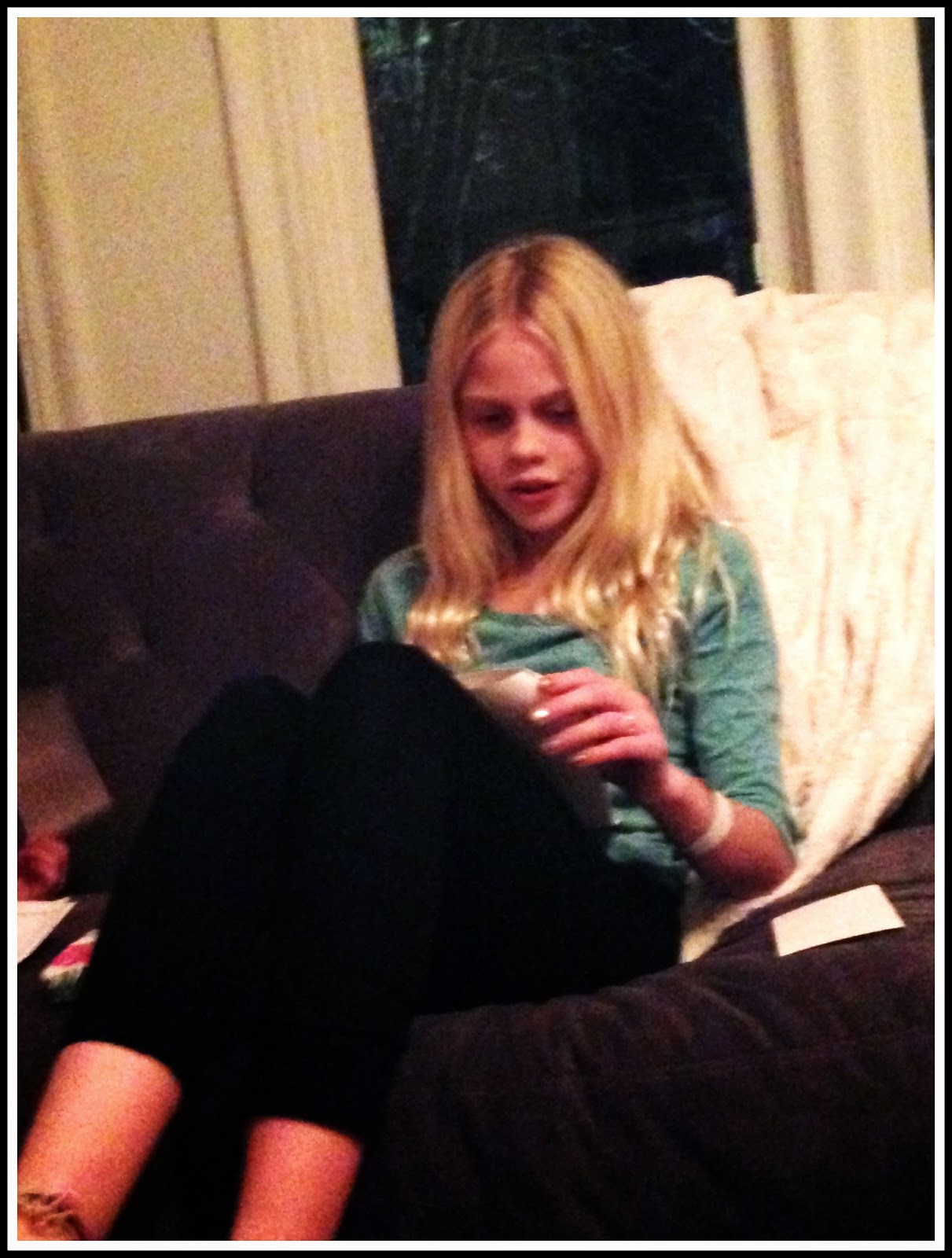 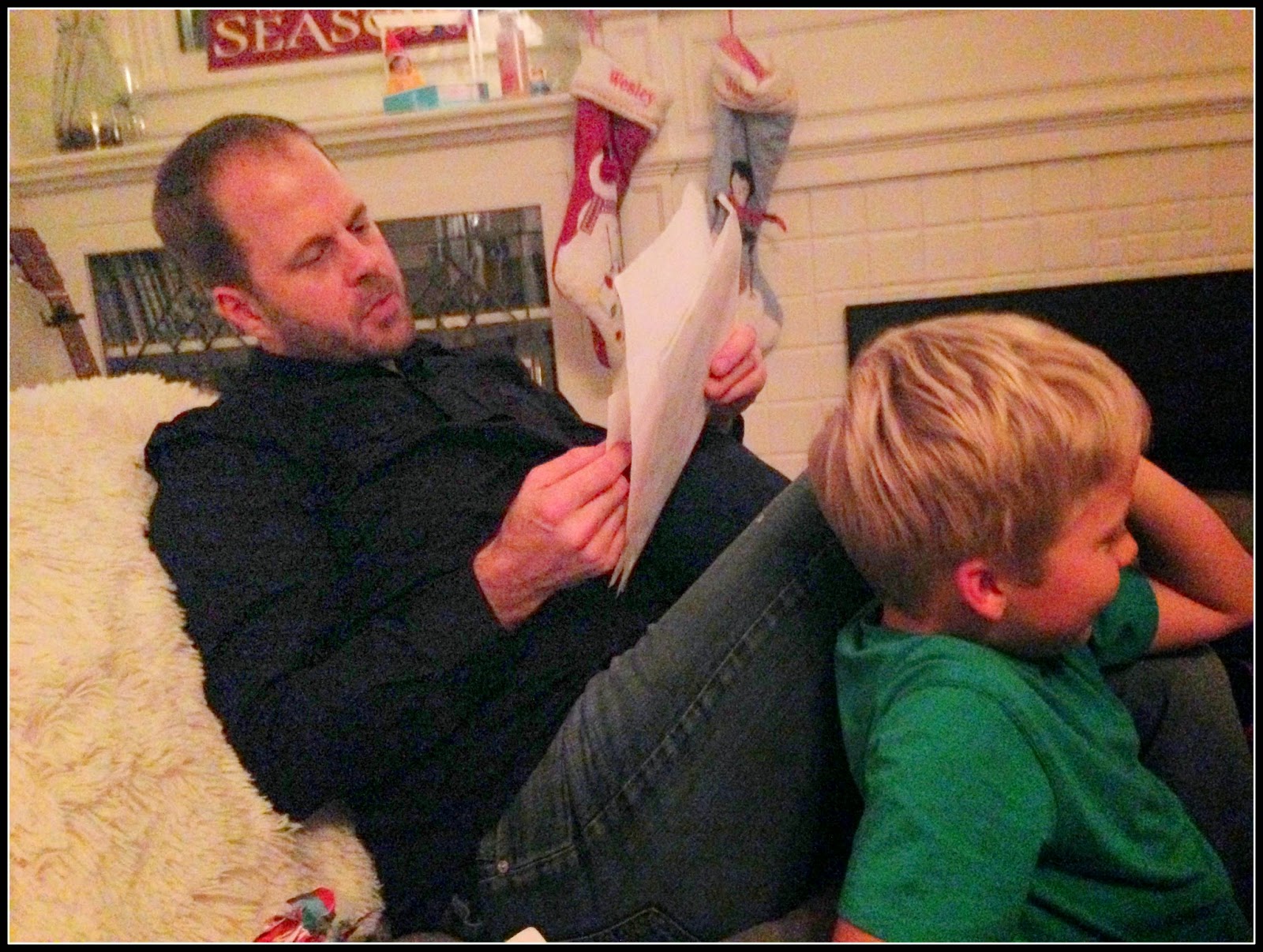 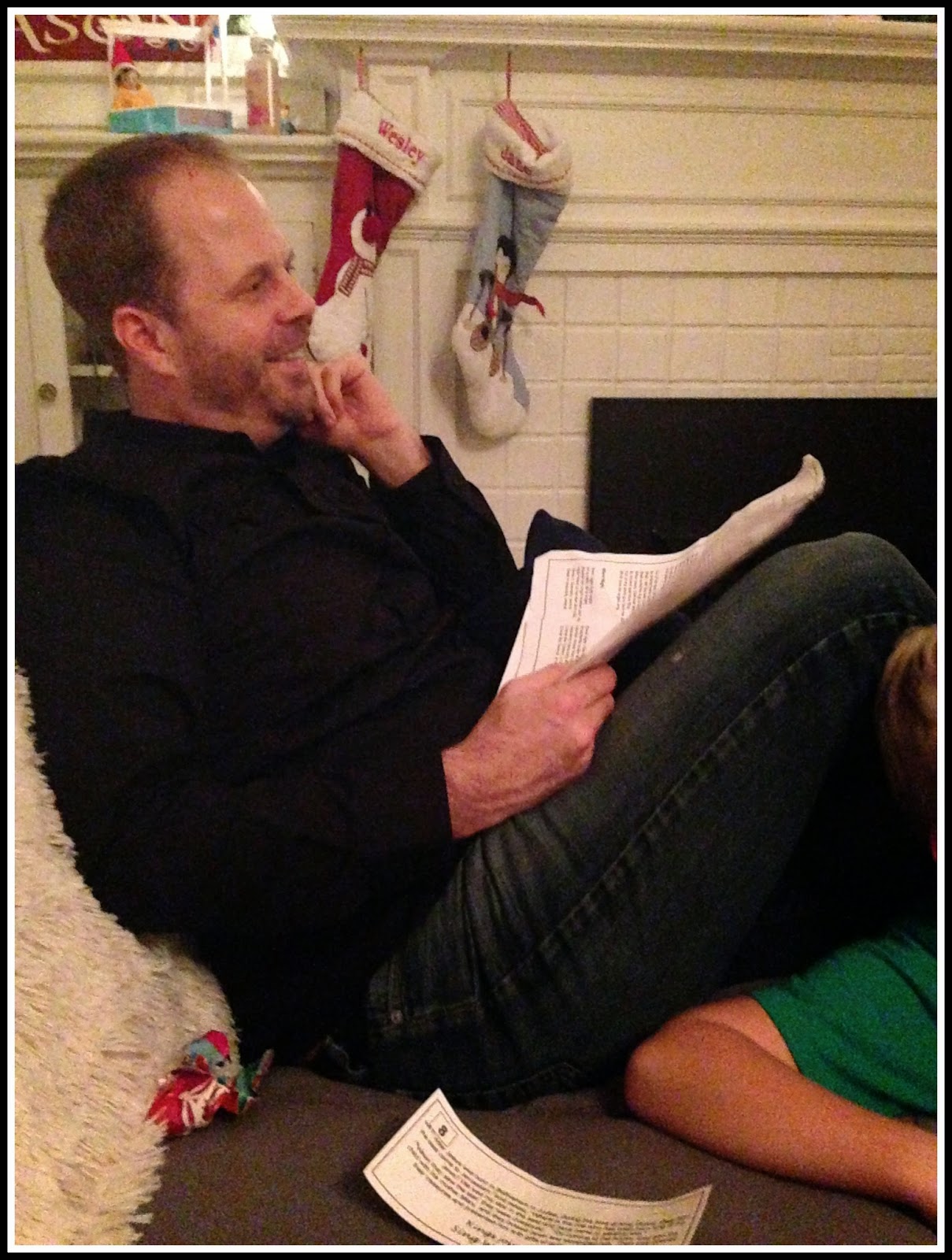 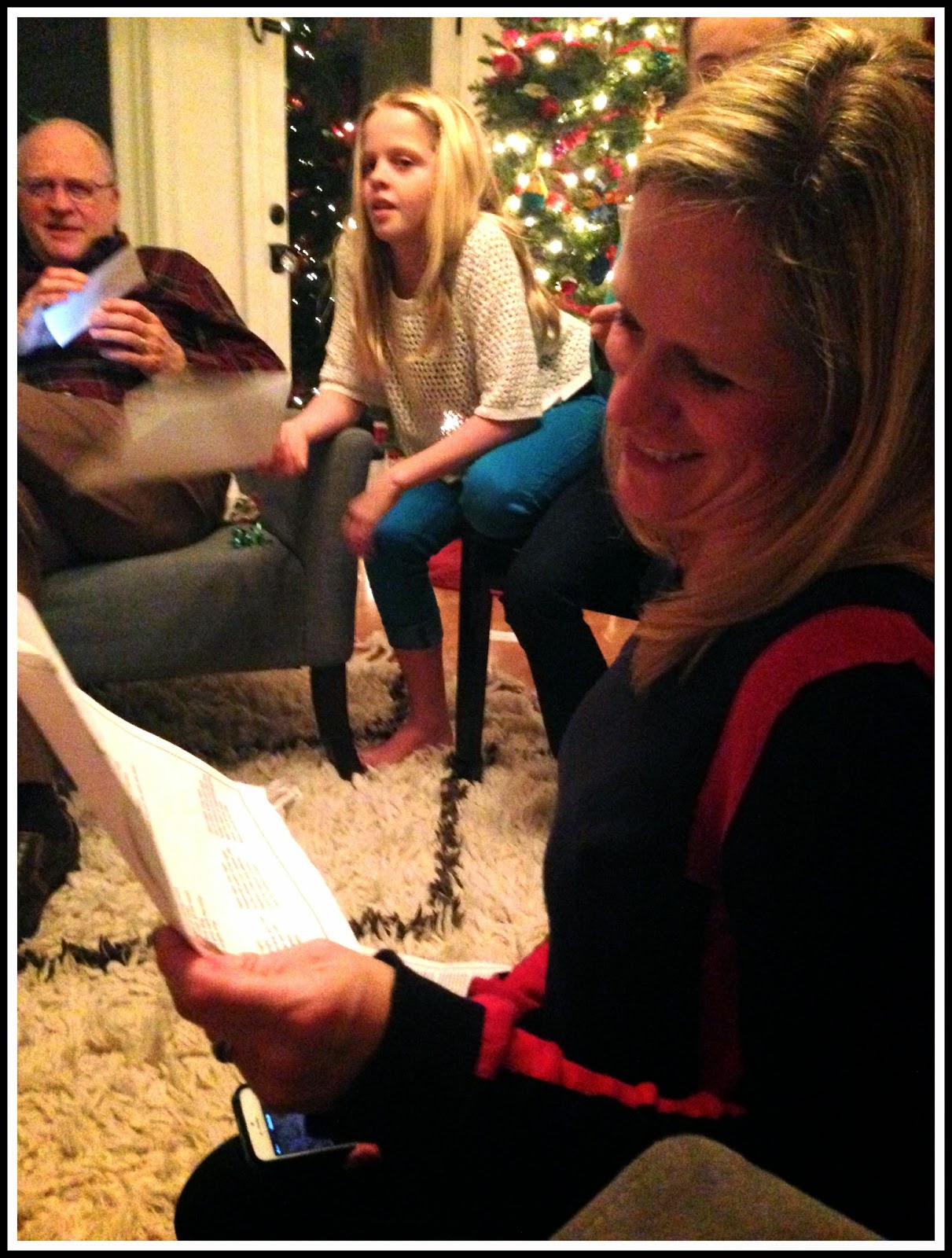 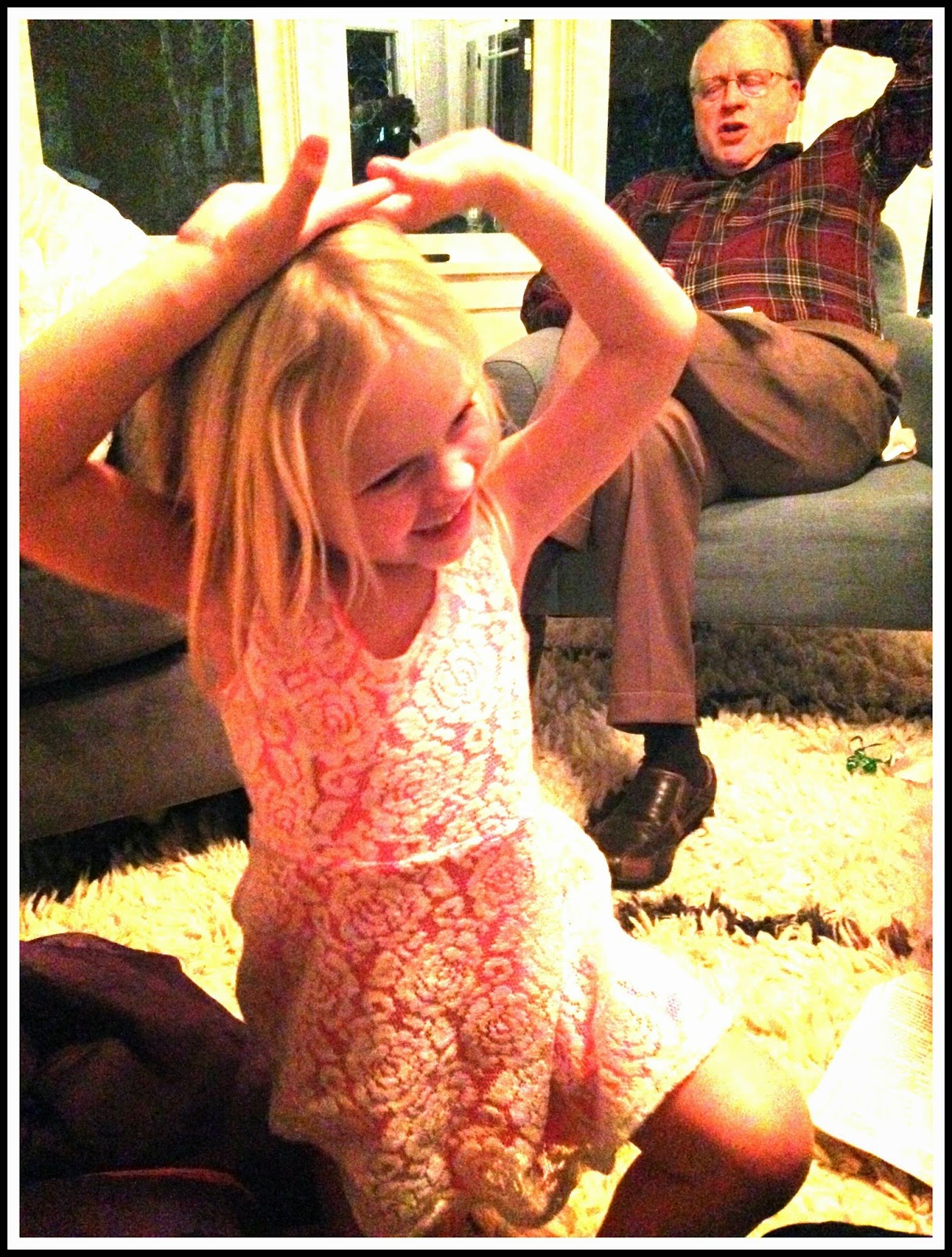 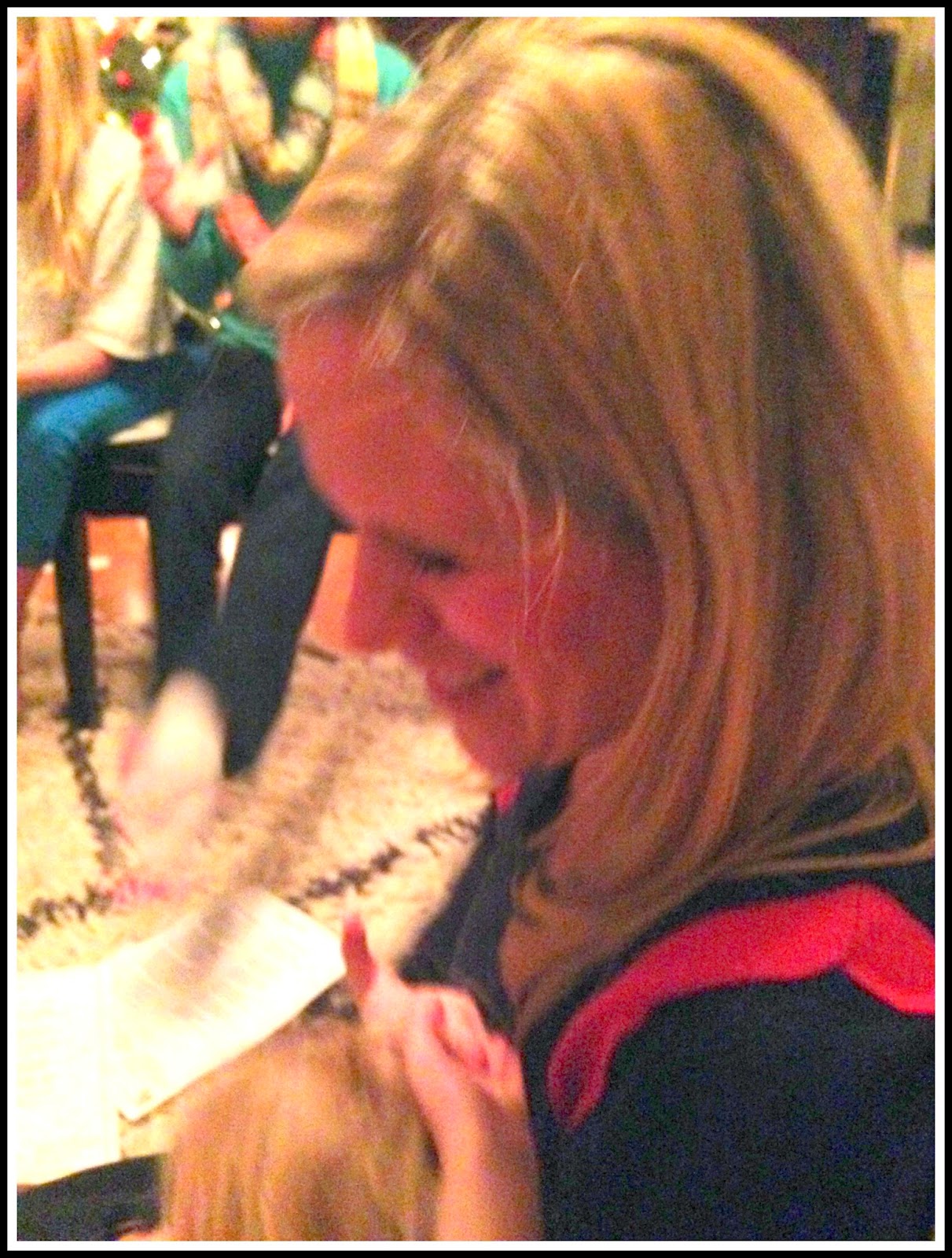 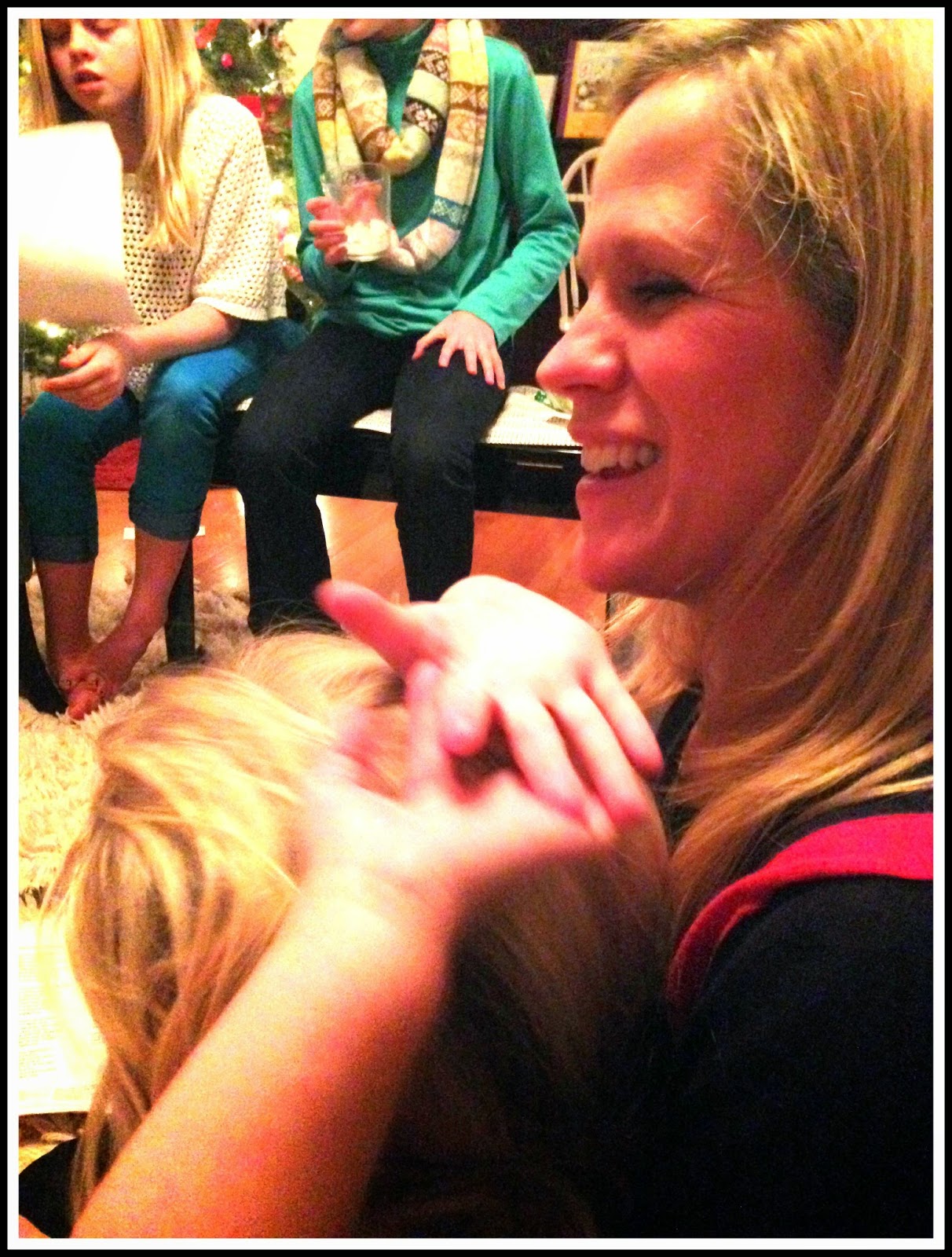 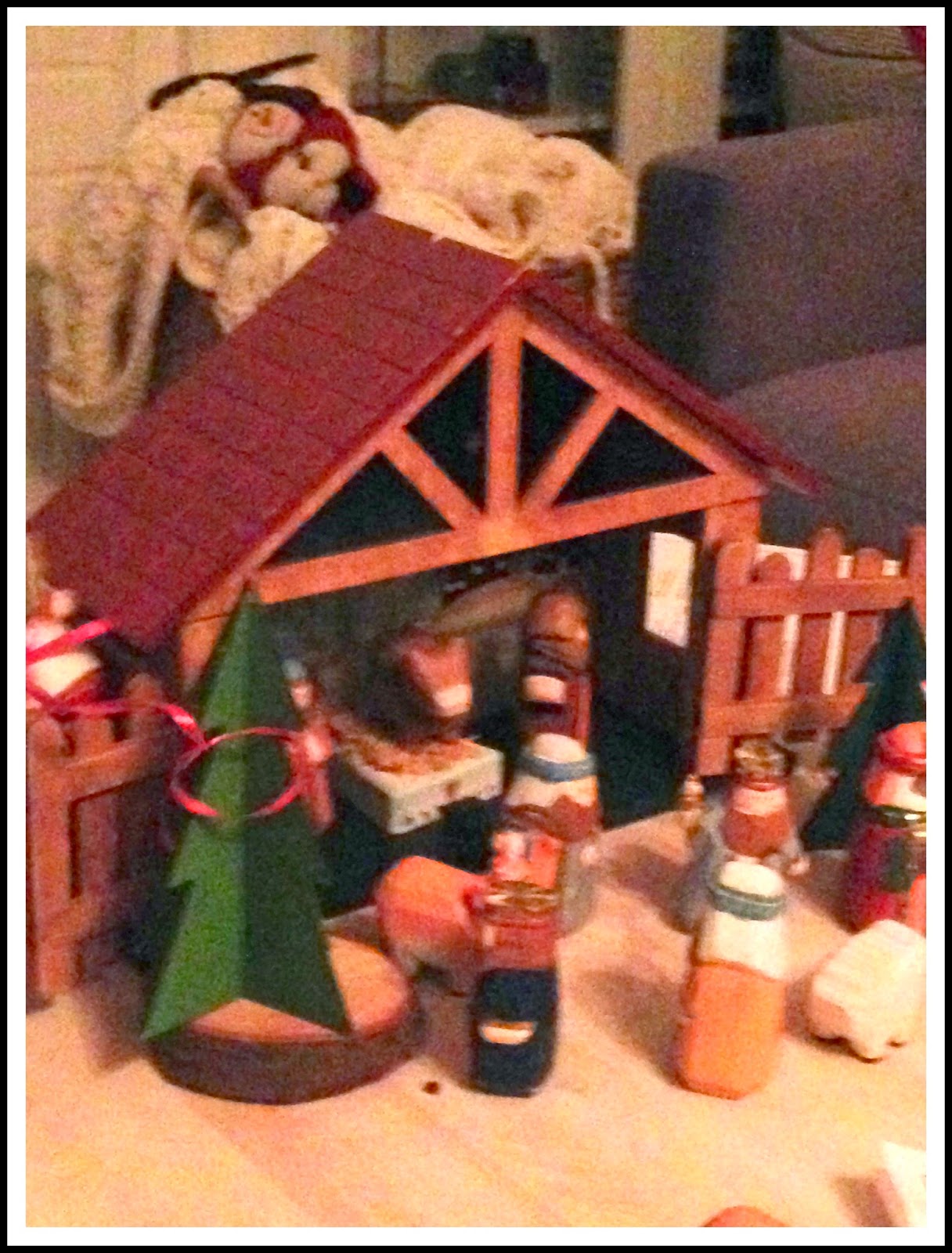 Here are all of the cards below that I was able to track down at the end of the evening. As the kids ran off to play hide-and-seek after our last song, I think a couple of the papers went with them upstairs. I'll have to track those down another day. :) 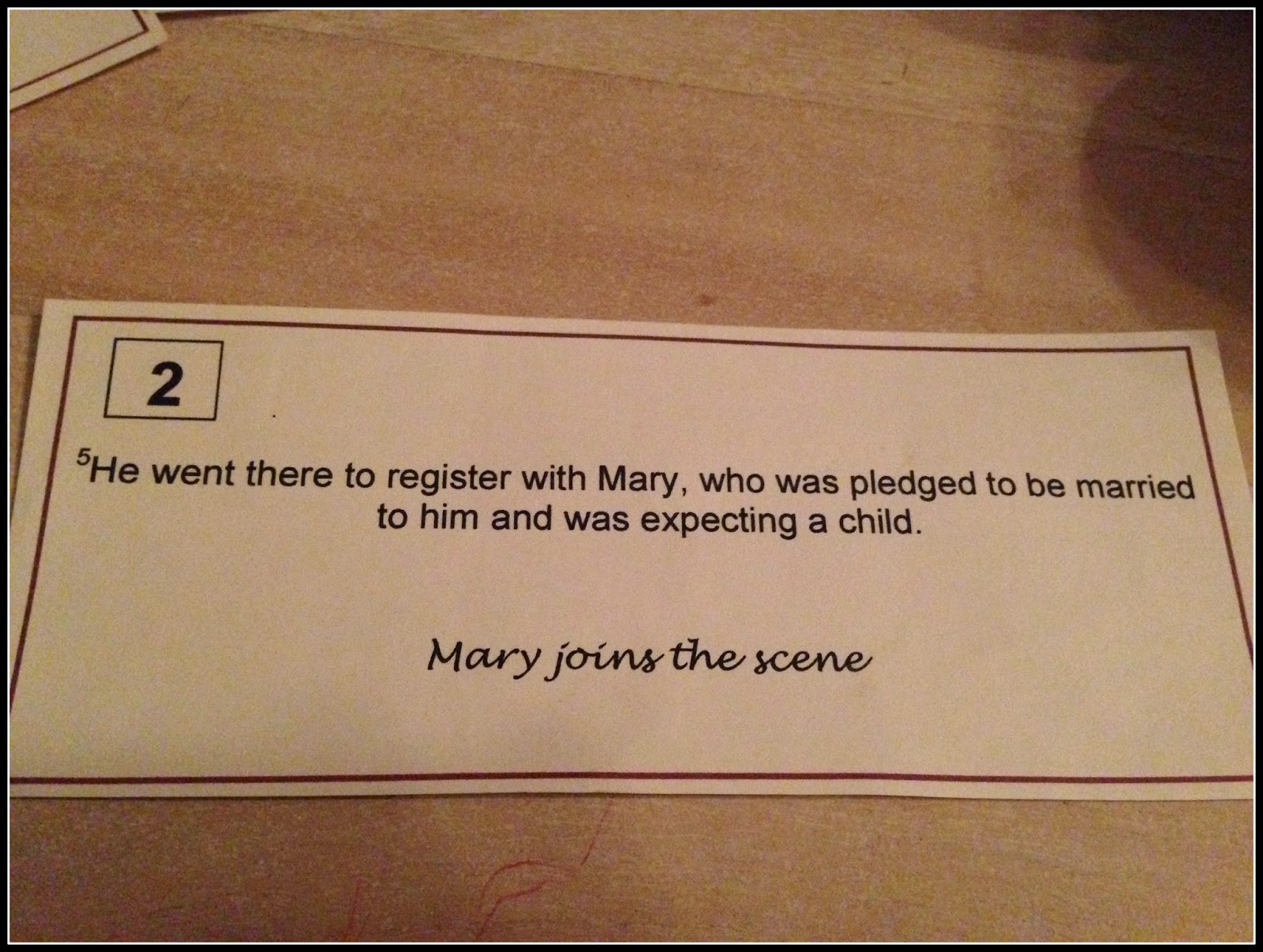 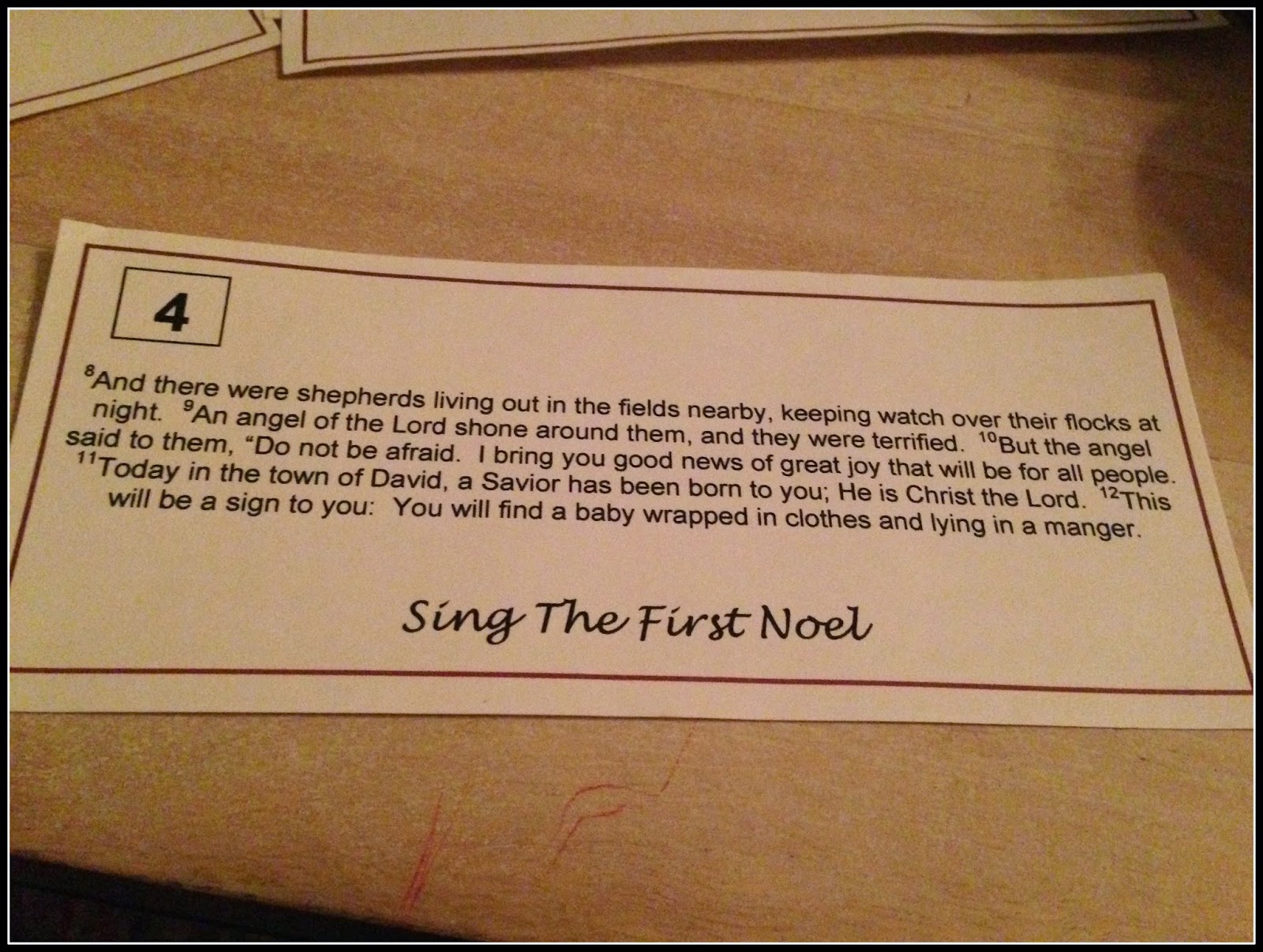 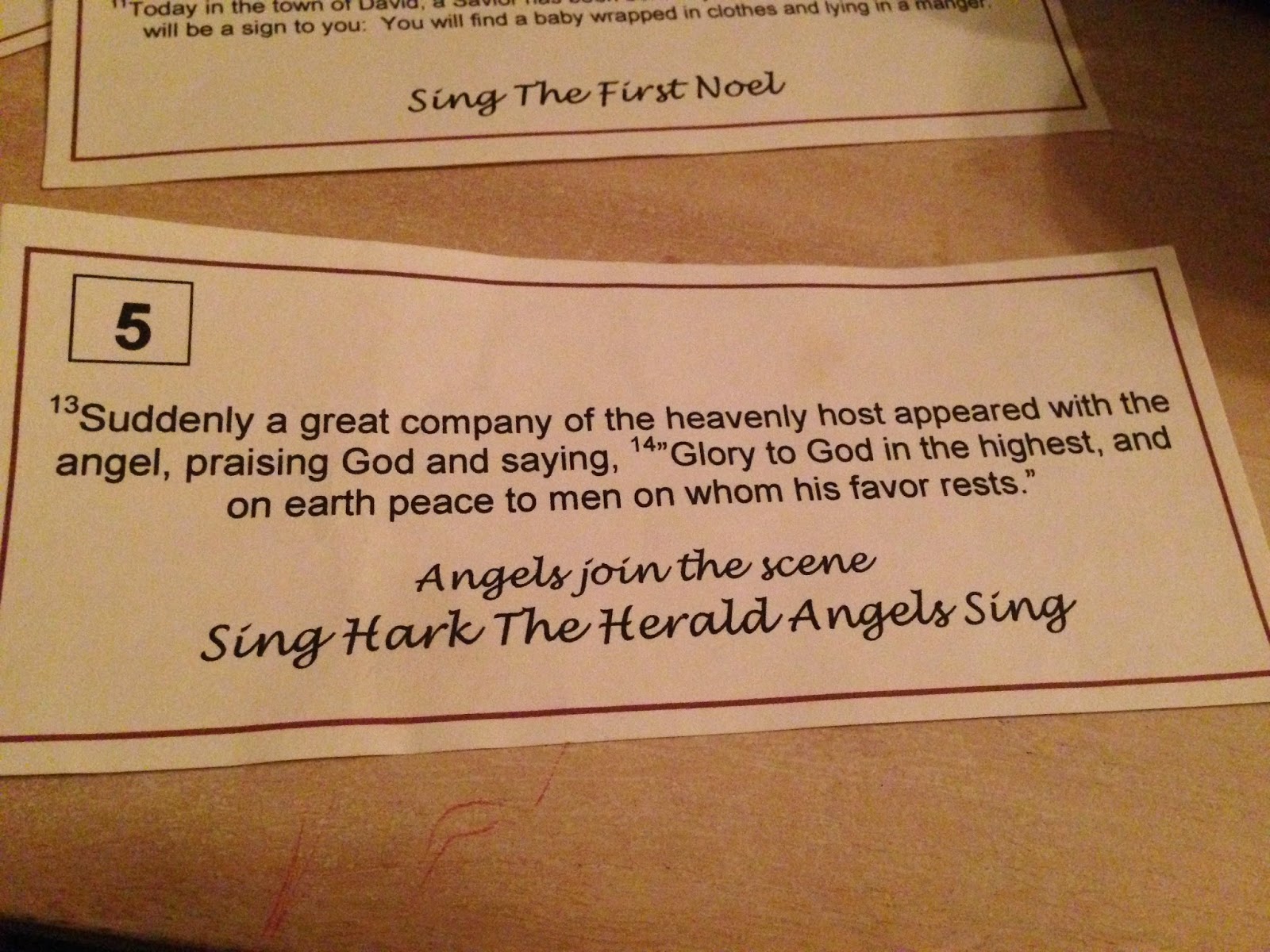 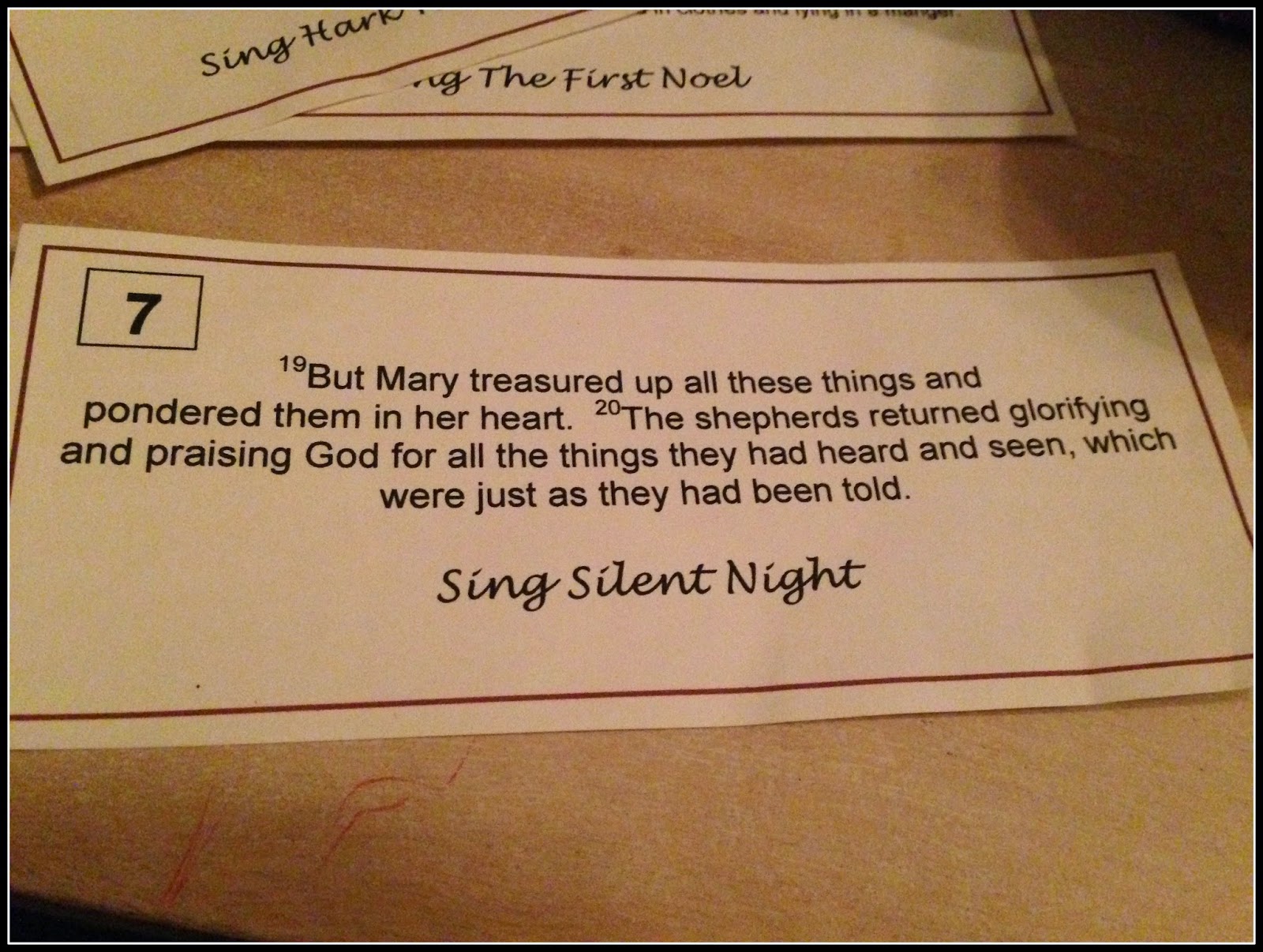 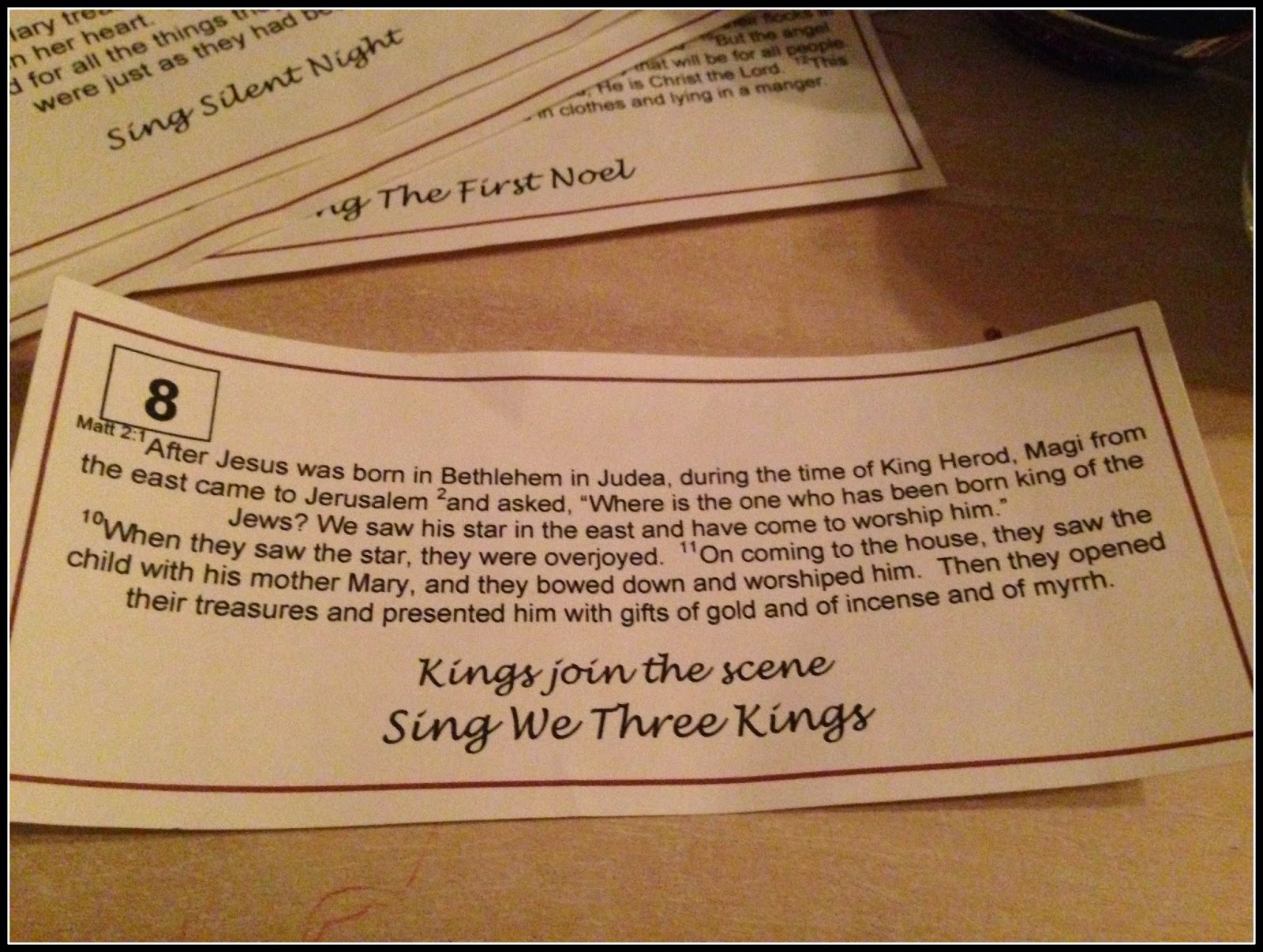 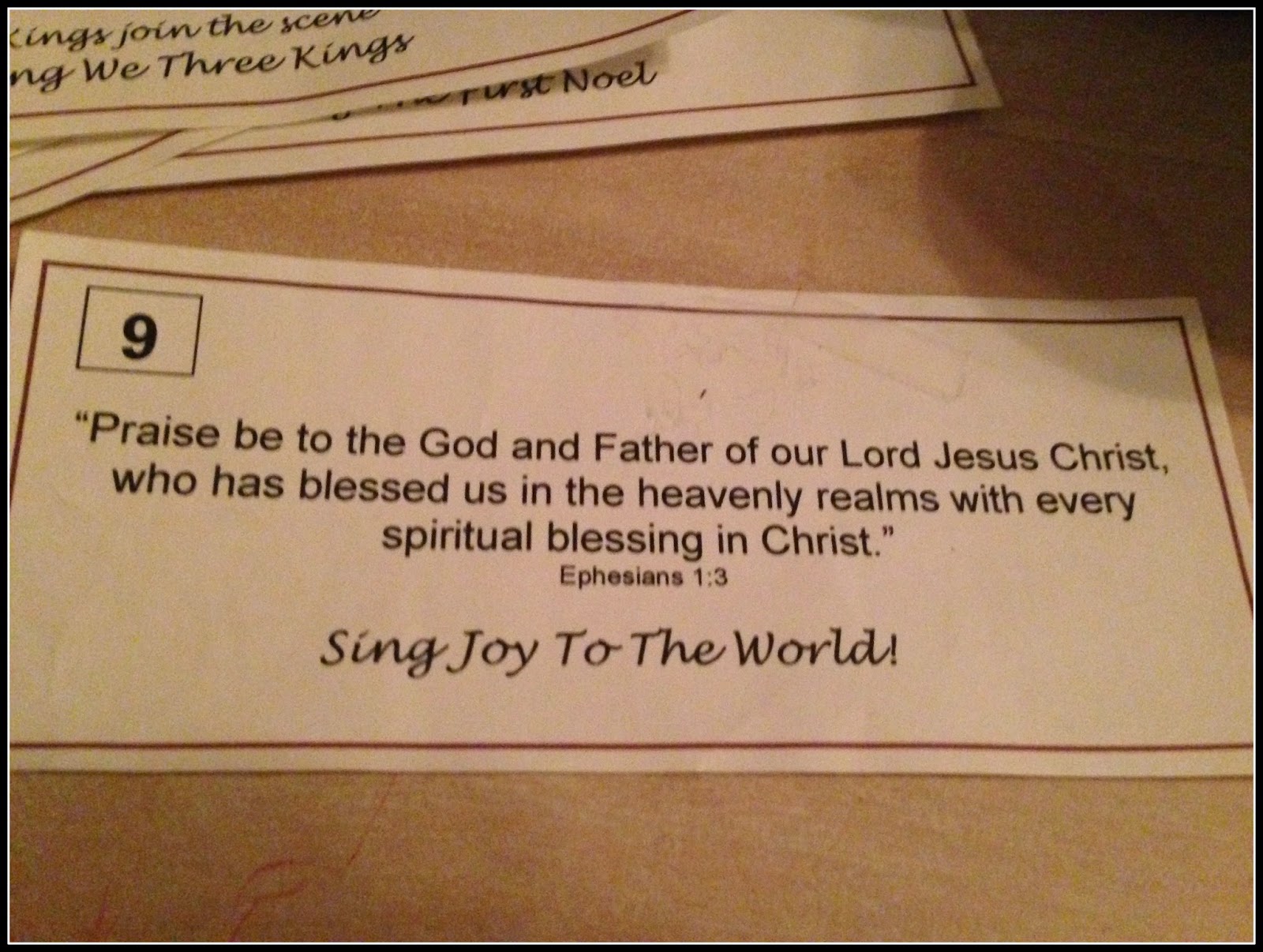 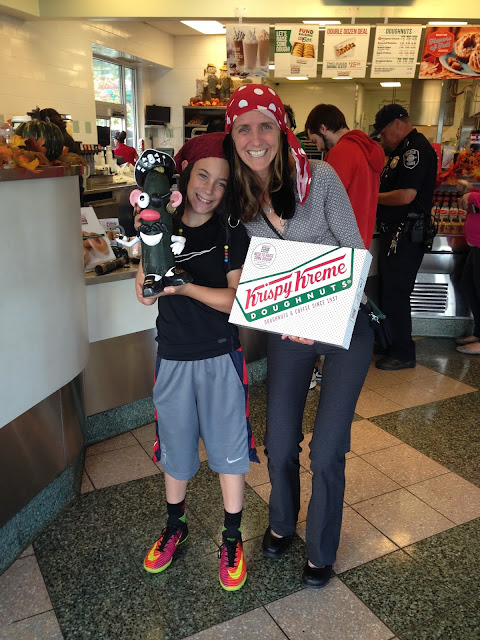