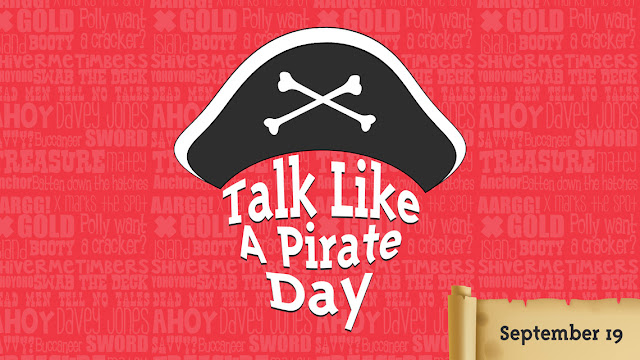 I woke up to the news that on this day (National Talk Like a Pirate Day 2017) that Krispy Kreme was not going to be in the spirit giving away doughnuts like they've done in the past. As the article below says, "SHIVER ME TIMBERS!"

Never fear- I decided that doughnuts were still in order so I picked up some Top Pot doughnuts for the celebration after school. However, in order get the doughnut, pirate speak was the payment required.  ARRRR! 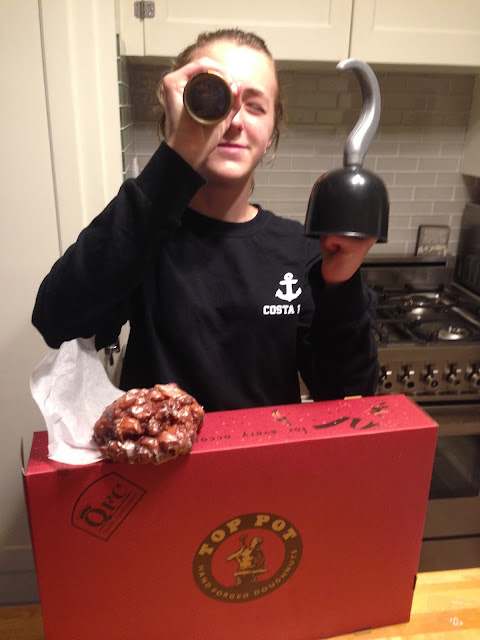 http://metro.co.uk reports, “The International Day of talking like a pirate began in 2002 and is still going strong in 2017 as people gear up to speak a new sea fairing language for the day.
It was initiated in 2002 by two guys who started to would start conversations by saying ‘Arrr!’ and a game od puns ensued and 15 years later here we are.
The day was decided on as it was one of the founder’s ex-wife’s birthday and they couldn’t think of any other important historical memorial day that was occurring on September 19.
The pair claim that talking like a pirate adds ‘zest’ and ‘swagger’ to your conversations and this justifies the need for an entire day for it.
Well of course.” 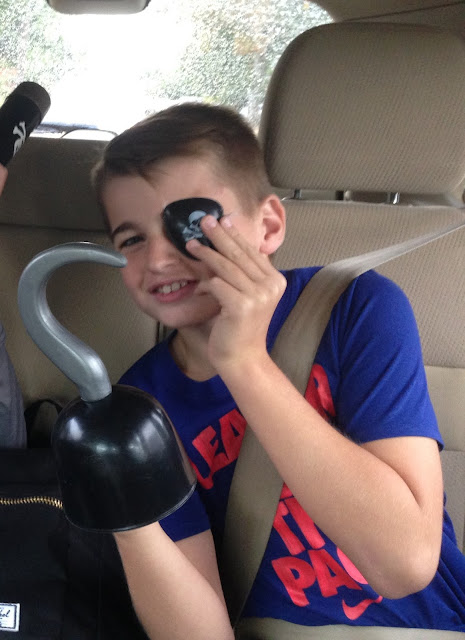 How to speak pirate, or as the pirates would say how t’ speak gentleman o’ fortune
Blow me down – Oh my god
Avast ye – Look at this
Heave Ho – Put your back into to it
Pillage – Rob or plunder
Savvy? – Do you understand or do you agree?
Thar she blows! – When you see a whale 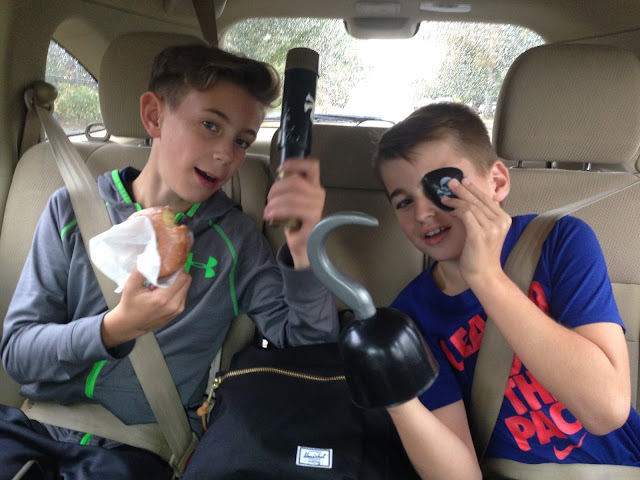 Shiver me timbers! – Oh my gosh
Scallywag – mild insult akin to rapscallion or rogue
Hornswaggle – to defraud or cheat out of money or belongings
Landlubber – big, slow clumsy person who doesn’t know how to sail
Scurvy dog – the pirate is talking directly to you with mild insult
Cleave him to the brisket – to cut across the chest, from one shoulder to the lower abdomen 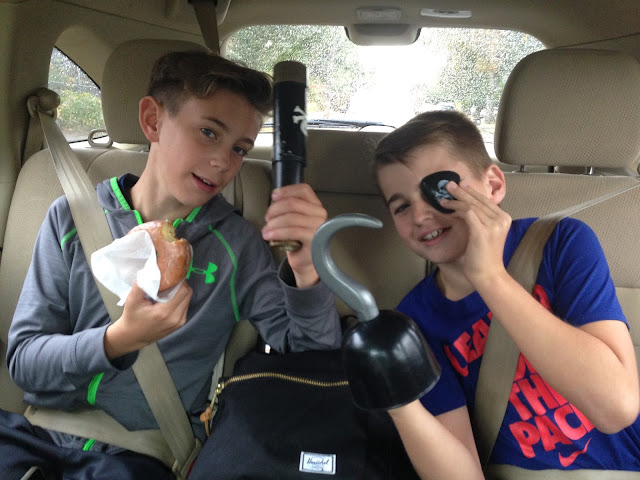 Dead men tell no tales – phrase indicating to leave no survivors
Scuttle – to sink a ship
Seadog – old pirate or sailor
Old Salt – an experienced sailor
Three sheets to the wind – someone who is very drunk. One sheet is mildly drunk and four sheets is passed out
Batten down the hatches – put everything away on the ship and tie everything down because a storm is brewing
Aaaarrrrgggghhhh! – the exhortation of discontent or disgust
Ahoy! – Hello!
Ahoy, Matey – Hello, my friend!
The Black Spot – Death threat 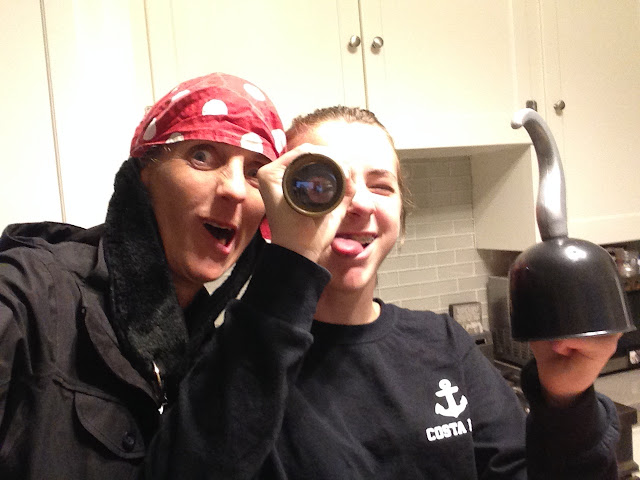 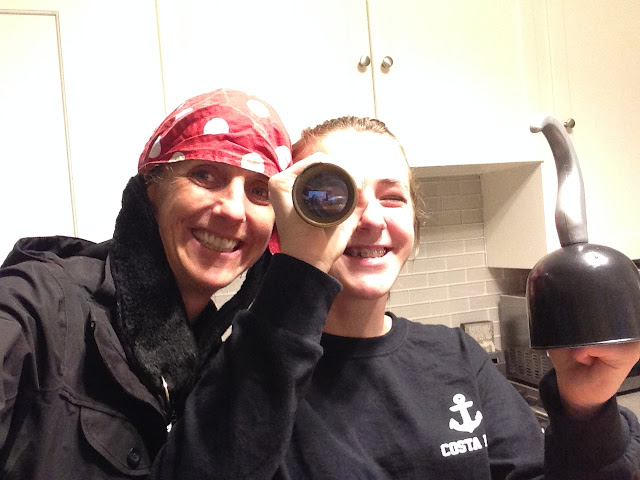 To get in true pirating spirit you can find out what your pirate name would be so you can celebrate in authenticity. 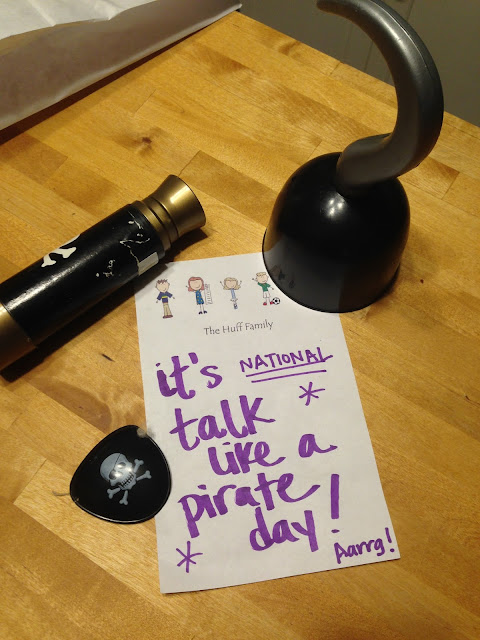 May 15, 2018
Our boy is turning 13 this month so we've been intentional about trying to create something that would fit his personality and that would speak to his heart to help mark this "crossing" year.  We did a more elaborate version of this for his sister, Anna, but he made it very clear that he did not want the same kind of  pageantry.   As we thought about how to tweak some of our ideas that we'd put in place before, we still had some of the same goals that we'd had for Anna.  The ultimate message that we wanted him to hear and remember was that he is loved. One small thing we did in preparation to drive this home was that we had him memorize Psalm 139 over a period of a few months as this passage is a beautiful reminder of God's love for us and His presence with us.   We also wanted Taylor to know that as he turned from 12 to 13 into the realm of being a teenager that he was not doing this alone. We wanted him to know that he has a team of people
Post a Comment
Read more

December 05, 2014
In my family growing up, my grandmother had a gumdrop tree.  My mother had a gumdrop tree.  And when I got married, I was given a gumdrop tree at a Christmas wedding shower.  The first one I had was a chintzy see-through plastic tree that was in a box that said "money tree".  I guess some people tied money to the branches as a way to give cash as a gift.  But in our family, this small plastic object was pulled out each year and gumdrops were stuck to the ends of the branches.  The bottom tray held a bunch of gumdrops under the tree for the extras that would not fit on the branches. I loved my daily ritual in December of passing by the gumdrop tree that was placed in the hallway outside the kitchen and of snatching a few gumdrops.  (Note to anyone who tries this: You can always conceal your snacking by restocking the empty branches with gumdrops from the tray. Your real challenge comes when the tray is empty. Good luck on that one.)  Here's the description I
2 comments
Read more

October 11, 2016
This text above deserves some background....  When Anna was in 6th grade or so, we went a fabulous talk that Julie Metzgar gave at Children's Hospital about puberty.  The talk was presented under a program called "Great Conversations" and is tagged as one that is for "helping preteens and their families in conversations about body changes, sex and other growing-up stuff."   During one of the talks about girls getting their periods, Julie Metzgar showed slides of girls in villages around the world where the girls are honored and highly esteemed when they get their first periods.  This rite of passage  is celebrated as girls are preparing for their roles as women.  In some cultures, these celebrations are as lavish as weddings and they are significant markers for the young women and their families.  Rather than whisper about this behind closed doors and pretend that nothing has happened, Julie encouraged us to talk to our daughters about somethi
2 comments
Read more